The optical properties of glazings have, by far, the greatest impact on a building. But aside from aesthetics, other primary reasons for including glass in construction include bringing in light, and in some cases, views. Solar Heat Gain can be viewed as either an advantage to offset energy consumption, or, as a disadvantage that contributes to energy consumption. This juxtaposition of perspectives is due to climate, latitude, building orientation, and architectural design.

Solera® products also excel in solar control all Solera® products diffuse light and have low solar heat gain values. Light diffusion has important benefits both for daylight distribution and thermal comfort. Diffusing the light distributes it evenly throughout the space. The solar infrared energy is also diffused and evenly distributed, and as a result, occupants of the space don't experience hotspots.

In cooling climates, solar heat gain contributes to the energy costs. However, it must be noted that natural daylight has such a high luminous efficiency, that for a given lumen input, the total heat introduced is equal or less than even modern LED lighting. With proper design, and daylighting controls, natural light need not result in a net cost — especially considering lumens from glazings are free, and even efficient light fixtures still consume considerable energy. In any climate, solar heat gain in the form of direct beam sunlight can negatively affect occupant comfort. A common approach to mitigating this is the use of solar control Low-E. The advantage of these type of products is that they minimize solar heat gain while maintaining VLT. There are disadvantages also:

Some architectural designs take advantage of the seasonal variations in sun angle. One example of this design is the use of deep overhangs on South elevations. This shades the glass in the summer when the sun angles tend to be high, and allows full sunlight in the winter when the sun angles are low. The disadvantage of this approach is that the light levels are low in the summer months, so the advantages of daylight are lost. Solera® pairs well with passive designs, as it mitigates glare and hotspots and reduced heat loss in winter.

Heat Transfer - How each type of Solera® Insulates

Heat is transferred through conventional glazings in two ways: convection (air movement) and thermal radiation. To insulate, a material must address both modes of heat-transfer. All Solera® products distribute light the same way, the type and amount of insulation is what differentiates them.

Solera® L provides all the optical benefits of translucent glazings along with excellent control of solar heat gain, but insulates just like a conventional IGU.

Solera® R5 (either with the T or S spacer type) contains an insulating core. The insulating core of the Solera® glazing unit is a honeycomb transparent insulation material called InsolCore™. The honeycomb has cells small enough to create dead air spaces where convection cannot occur. Radiation transfer is suppressed because any thermal infrared radiation that strikes the cell walls is absorbed by the cell wall material.

Solera® +Aerogel R5, R9, R18, and R25 variants feature InsolCore™ transparent honeycomb insulation, which contains the aerogel granules. Since the air is replaced with aerogel granules, the heat transfer with aerogel filled honeycomb is reduced solely to conductive heat transfer. Cabot's aerogel is among the lightest and most effective insulating materials in the world. Cabot's aerogel, (formerly Nanogel®), is a solid which consists largely of air (>90%) contained in a structure with pore sizes less than the mean free path of air molecules, which severely inhibits heat transfer through the material, enabling world-class performance. 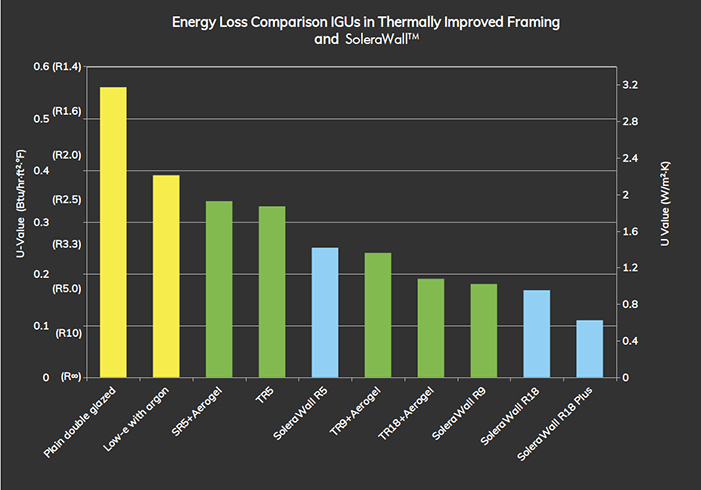