It’s not every day that one gets to design a circus school. There are only four in the world.

Robert Magne, principal at Lapointe Magne et Associés, won that privilege in 2001 when his firm was commissioned by École Nationale de Cirque to create an entirely new, purpose-built facility. One look at the new structure makes it evident that he intended to have the building itself proclaim its role in the community.

The community in this case is the City of Circus Arts, a partnership with Cirque du Soleil and En Piste (the national association of circus arts professionals and organizations). The partnership’s goal was to create a circus arts “city” in Montreal’s Saint-Michel District that would become a focal point for the creation, training, production and performance of circus. It would clearly reinforce Montreal’s prominent position on the global circus scene.

The school’s programs enable young people to begin professional training while pursuing their primary, high school or collegial studies. The institution is provincially accredited and is financially supported by the Quebec government and the Government of Canada.

In addition to supporting conventional education, the design brief for the international competition identified the need to integrate two gymnasia for the teaching and practice of the circus arts. The gyms required sufficient height (35 feet) to accommodate trapeze and other aerial work. The high-risk nature of circus work demanded even and high illumination levels without glare. This may have been a straightforward engineering task if the client had not also mandated a sustainable design, in a city where winter temperatures seldom peak above 0ºF. Magne’s winning submission demonstrated that sustainability could coexist perfectly with the operational necessities of the gym, as well as the sense of theatre that defines its presence.

Key to the project’s success was the counter-intuitive use of glass on a very large scale. Glass would put the students on show, a vital preparation for their careers before audiences. Glass would unite the school with the rest of the City of Circus Arts. Glass would also provide daylight, in support of sustainability. In order to do this, the obvious issues of dangerous glare and costly heat loss had to be overcome.

The east elevation of the gyms abuts the classroom and administrative facility, while the north elevation is largely opaque. On the south elevation of the stacked gymnasia, the combination of negative sloping curtain wall and closely spaced sun shades enables use of daylight rather than expensive to operate HID fixtures. High performance vision glass facilitates views, in and out, while minimizing heat loss in winter and heat gain in summer.

Montreal’s northern latitude predetermined that, even in summer, the afternoon and evening sun angles would demand a high performance translucent glazing on the all-important west elevation. The nature of the training in the gyms also demanded total diffusion of incoming light, plus control over the level of light transmittance.

Etched glass would not provide adequate diffusion. Non-glass translucents could diffuse and insulate, but aesthetics, durability and light levels would all suffer. Solera, from Advanced Glazings Ltd., was identified as the only alternative that could satisfy the conflicting demands for glare-free daylight, the ability to “dial in” light transmittance levels, the achievement of very low heat loss/gain and an architectural life expectancy. Being glass, Solera also produces an architectural elegance, day and night, that is unmatched by other translucent daylighting options.

École Nationale de Cirque’s new school building was completed in early 2004 to rave reviews from faculty, students and the public. From all approaches, and at all times, it speaks of circus. It is undoubtedly the architectural centerpiece in Montreal’s City of Circus Arts. 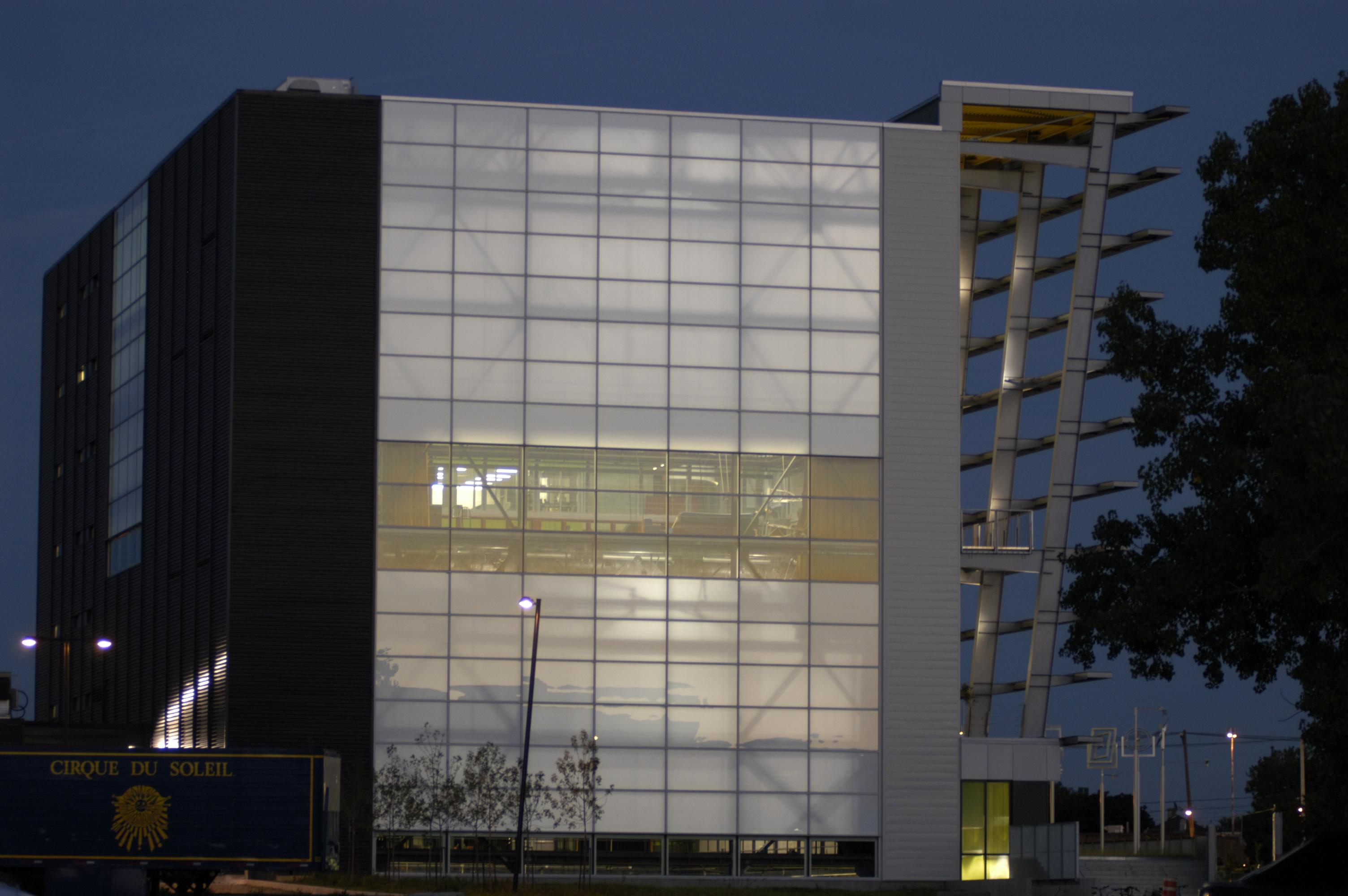 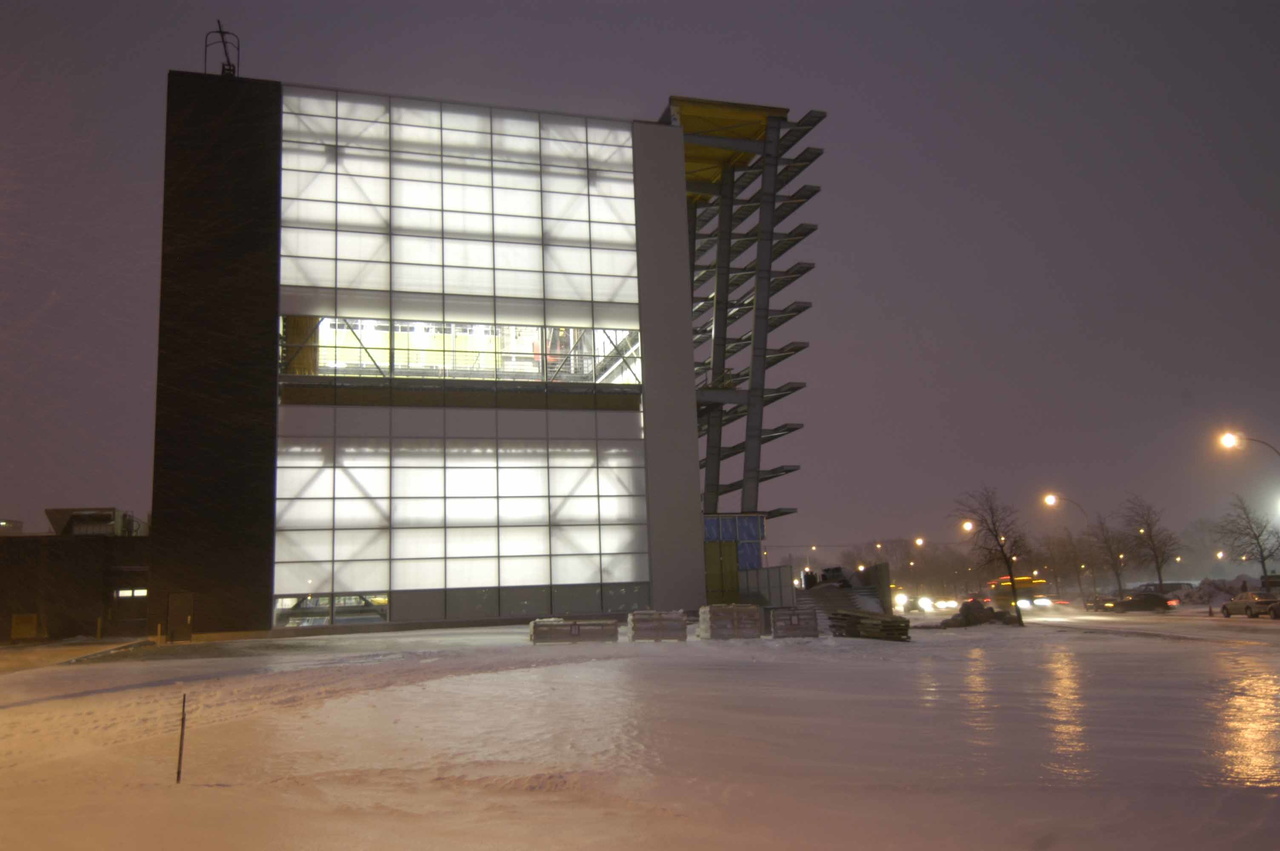 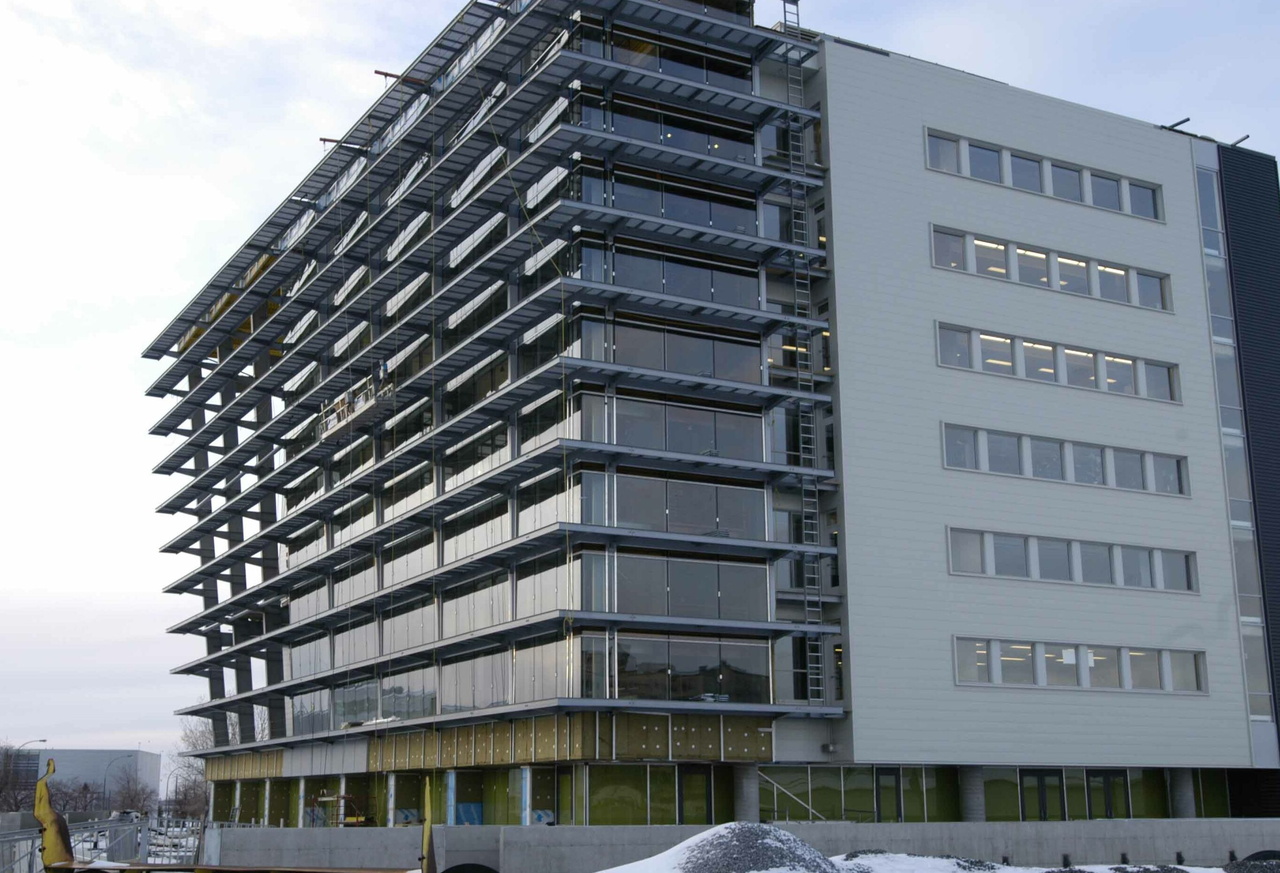 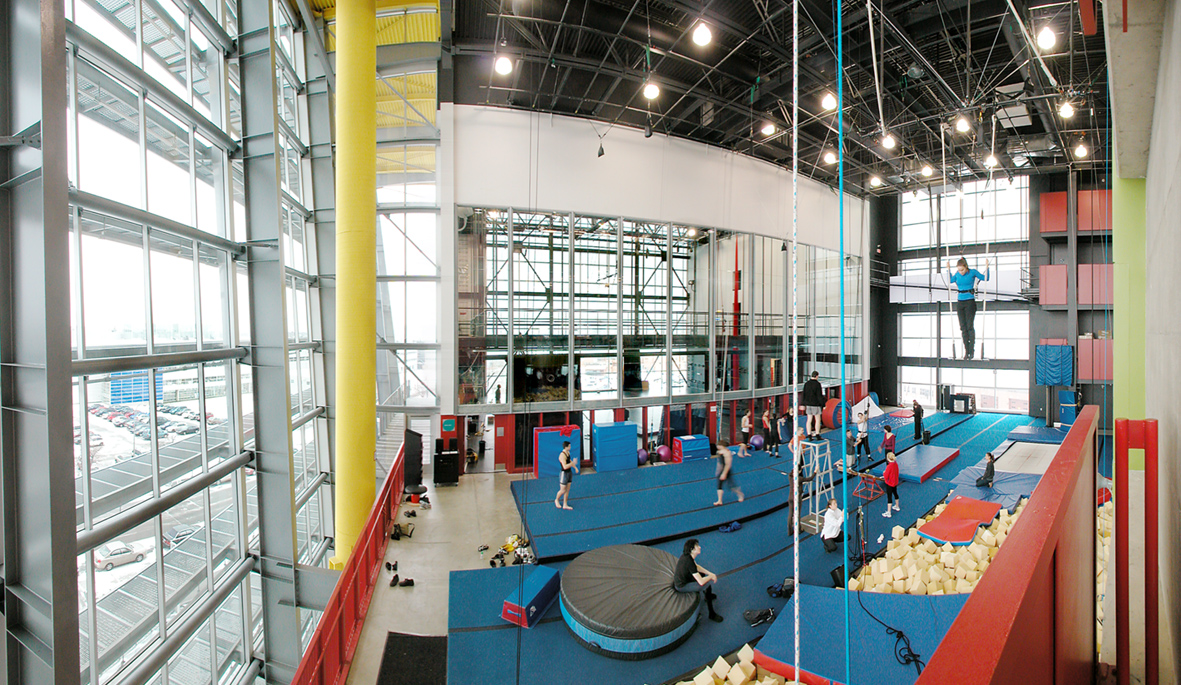 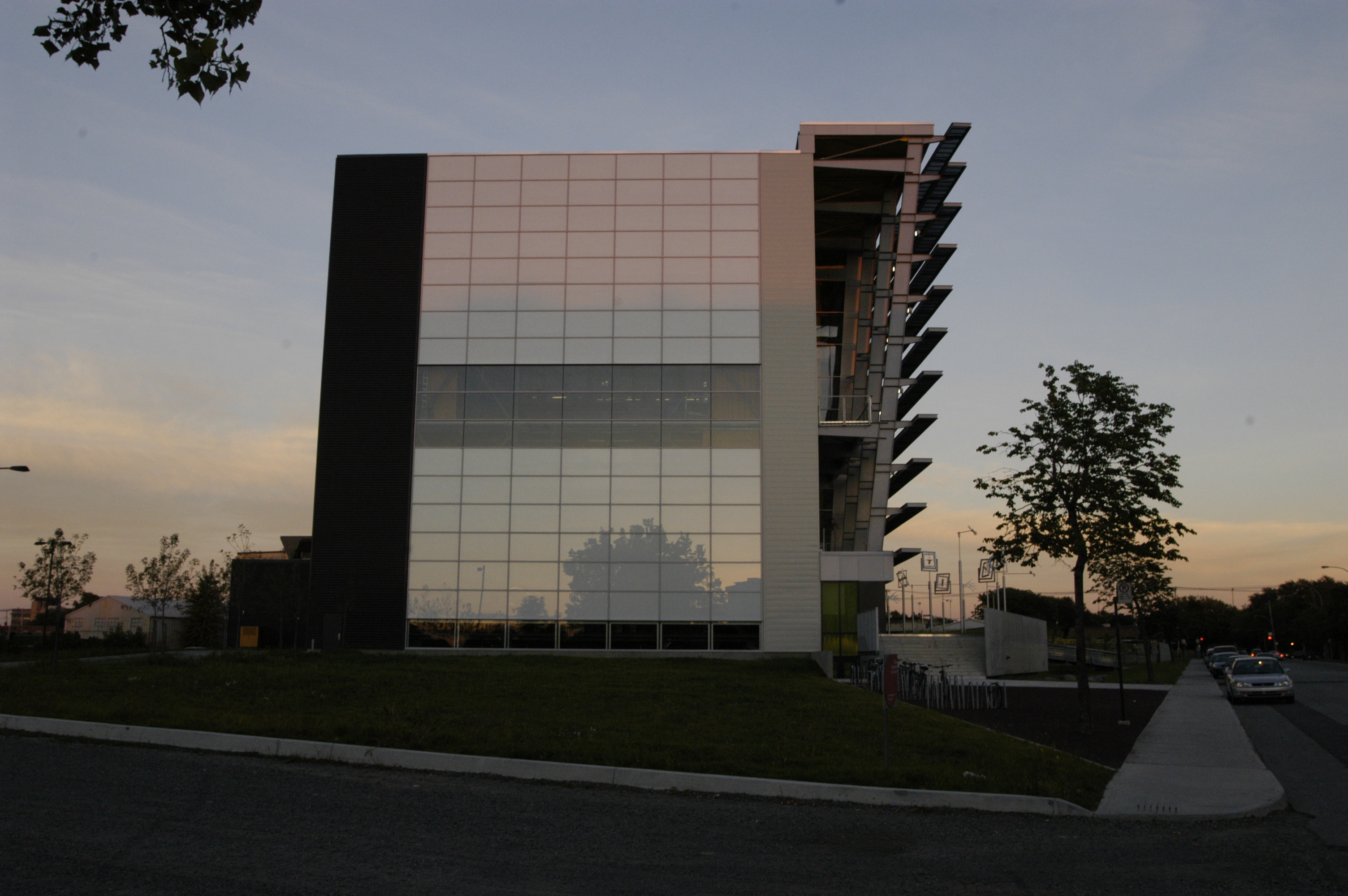 A Radiance simulation shows the penetration of daylight into the interior of the gymnasium at 3pm in January with only vision glass for glazing.